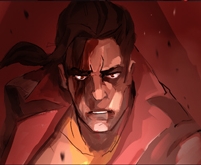 Founder of the North American Federation. Overseer of Bastion. Undisputed as the strongest being on Earth.

There was once a time where Helios could look back at his accomplishments and claimed to have brought order to the world. Under his guidance the superhuman community not only saw recognition as champions of humanity, but were organized into a peacekeeping force that conventional crime, political corruption, and terrorism could not stand against.

Willing to sacrifice everything to save the people he swore to protect, Helios' participation in the Ark's design would see the powers stripped from him and almost every living superhuman on the planet. Those who didn't lose their gifts often were met with a tragic fate.

Even after losing his tremendous power, Helios' unrelenting sense of responsibility would keep him searching for a cure. Something that could undo the damage he wrought upon the world, and set things right once and for all.

With no living family to speak of much of Tumbleweed had considered James to be a son of the town. Hiding out in local stores as a teenager, he quickly proved to be adept at fixing things. It wasn't long before his talents were noticed by hardware store owners Lisa and Harold Stillwater.

After taking on their family name the vagrant teen would become a valued member of the community in the years ahead. Far removed from the superhuman struggles occurring across the Federation, James focused on preserving the town that had saved him from a sad and aimless fate as a youth. Even the superhuman conflicts breaking out across the country seemed so far away.

As Dust finished settling over the land, just beyond the ruins of Tumbleweed, Diana and Lawrence would find James in a cabin isolated in the wilderness. Sharing his knowledge and provisions, James would accompany the duo on the road in their quest to reach Bastion.

An experienced reporter with a firm anti-superhuman sentiment, Diana did her best to call for government transparency in the wake of Federation military expansion. At a time when superhuman popularity was at its height Diana's questions and investigative reporting made her intensely unpopular with both government officials and the general public -- although neither fact slowed the sales of her conspiracy theorist editorial.

When the separatists began their attack Diana was on the front lines, gathering stories from survivors and soldiers alike. Casting aside her distrust of the Federation she had planned to record the heroic exploits of those trying to live in the shadow of warring gods.

Travelling between combat zones she would eventually come across Lawrence in the wake of devastation unleashed by the Ark. Filled with resentment that her warnings had gone unheard Diana would convince the Federation soldier to join her in search for the truth -- under the condition that they help any civilian lives possible along the way. 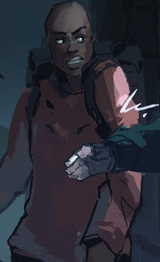 An honor roll student with a passion for gaming, Gregory had never planned much further in life beyond his graduate program. Following pressure from his family Gregory had relocated schools to live in the inner city. It was in a shared apartment with several friends that he watched the Dust settle over Manhattan moments before the city was torn apart by the Afflicted within.

Working his way through collapsed skyscrapers, shattered streets, and the remains of New York City's subway transit Gregory would eventually cross paths with Christa. Relying heavily on her extensive knowledge in combat and survival Gregory has grown to see her as more than just a woman of vast military experience.

Providing strength, insight, and good humor where he can, he follows Christa's lead in hopes of securing a better tomorrow.

A long history of military service supporting superhuman efforts, Lawrence was considered by many to be the culmination of what the Federation could represent. Charismatic, hard-working, and quick to action Lawrence was one of the first to arrive in Vancouver when the Ark was first launched.

Although visibly less damaged than most other urban environments, Dust's effect on Vancouver's superhuman inhabitants would trigger a vicious ground war that would last for weeks. In an effort to contain the Afflicted that had emerged several platoons had volunteered to stay behind while its citizens evacuated -- an effort that would see hundreds of lives sacrificed against a brutal, incomprehensible foe.

Alone and left for dead Lawrence gathered what survivors he could, guiding those he could to safety until he was eventually convinced by journalist Diana Nelson to investigate the remains of the Federation stronghold, Bastion. 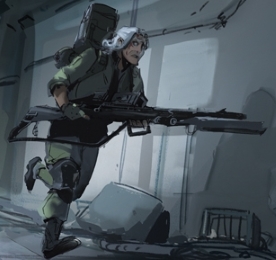 Formerly one of Germany's most talented snipers Christa jumped at the opportunity to join with the European Union's division of superhumans, one of the first and only humans whose talents enabled her to work alongside the world's mightiest.

Caught in Manhattan as a UN liaison during the initial chaos of the Separatist attack, Christa was an invaluable asset in aiding Federation forces. Her tactical expertise and skill in combat made her an unseen force of reckoning until the Ark dropped, tossing the city into total chaos as superhuman powers from friend and foe catastrophically tore Manhattan apart.

Nearly buried alive in the chaotic aftermath, Christa's story may have ended if not for the help of a young college student named Gregory, whom she now travels with in search of others who could make good use of her considerable talents.